I think we can all agree 2015 was the year of the variable-strength diopters or, as they’re popularly known, single focus solutions. Yes, I am talking about the Focus Module (FM Lens), Rectilux and Rangefinder. The FM had a good headstart, released to the public in late 2014, while the Rectilux and the Rangefinder started shipping almost at the same time, mid 2015. As much as you’d like, this is not the time I’ll throw them against each other. This comparison is coming soon and for now this is an in-depth explanation of how they work and why it took so long for them to show up. This is probably the nerdiest and most technical post I’ve written so far, so hold on to your optics knowledge and don’t hesitate to ask questions!

It all starts with the Iscoramas, back in the late 1960s. The Iscoramas were the first anamorphic adapters that could go on any taking lens and not have you worrying about dual focusing: focusing both lenses (taking lens and anamorphic) at the same distance. You set your taking lens to infinity and use the Iscorama’s focus ring, that was so basic they were sold attached to infinity-fixed-focus 50mm lenses. Isco Optics had developed their own way of achieving this result and patented its optical design – unknowingly set the prices through the roof forty years later. There are a few patents to be found on Google such as these three, two for the US, one for Europe (patent one, patent two, patent three), all filed by Isco or Schneider GmbH (the evolution of Isco Optics). The patent prevents other companies from making any lenses that work the same way, which ended up leading the Russians towards their synchronized focus rings for taking lens and anamorphics and depriving the world of any other single focus anamorphic adapters.

For the longest time everyone thought this was an insurmountable barrier since nobobdy was allowed to make a single focus adapter based on the same principles. Oh, yeah, and what are these principles? Let’s consider a three-part optical chain consisting of A + B + C, A being the focus group, B is the anamorphic group and C is the taking lens group, and A-B-C is the path light follows from the outside world to the sensor. For starters, we know the third group, the taking lens (C) has to be set to infinity. Then, we have the anamorphic block in the middle, (B), which is also set to infinity, and a third optical part, the focus group (A), that consists of… yeah, you got it right, a variable-strength diopter. We all know what diopters are and what they do by now, so the concept of a variable-strength diopter is simple: it’s a combination of optical elements that acts as a diopter by changing the maximum focus distance – infinity – to something else. While regular diopters have their power set in stone (or glass, haha), variable-strength ones range from +0, at infinity, to +1 (Rangefinder) or +2 (Rectilux), dragging infinity down to one meter or half a meter! 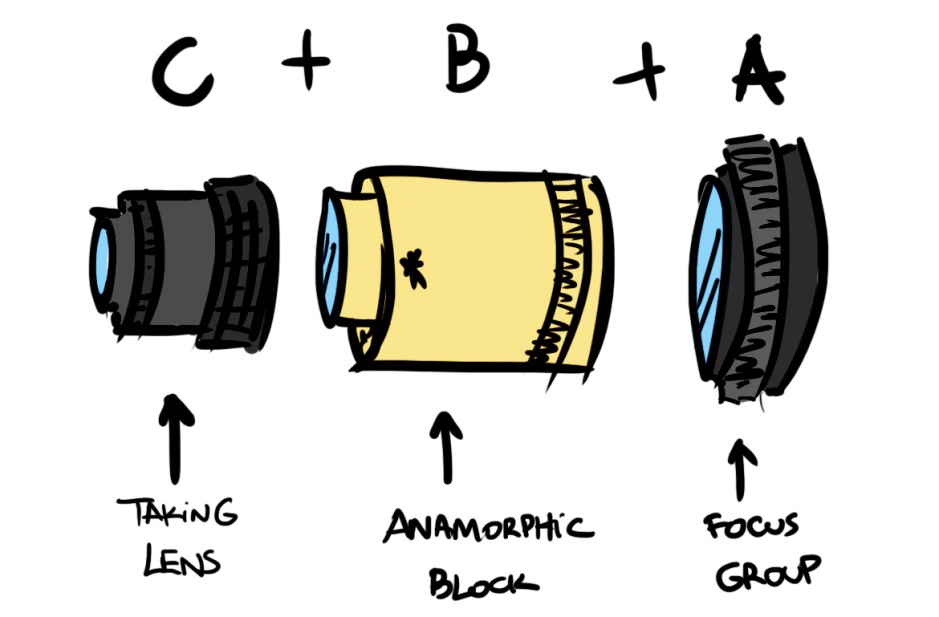 So why do the other components of the system have to be focused at infinity? For one, it’s well known that anamorphic adapters perform best at infinity, with sharper focus and their nominal squeeze factor, second, if you’d set the variable diopter at the +0, or infinity position (the same thing as not having it on the optical chain), the other lenses are expected to see an image at infinity, and the variable-strength diopter will bring “infinity” closer as you change its strength. Plus, this allows you to have distance marks on your single focus solution like the Rangefinder does, that relate directly to the diopter strength that is being used, converted into its maximum focus distance. Before I proceed, I thank John Barlow for this explanation, more than a year ago. I haven’t found an easier one to understand out there yet.

Now we know how the variable-strength diopter affects the entire system, but what took them so long to get here? My guess would be that everyone kept thinking about making a full single focus anamorphic adapter, and then hitting the patent wall. The moment they disconnected both parts – anamorphic block and variable diopter – the solution was found, since there were no patents preventing anyone to make variable-strength diopters. The requirements were hard though, since the glass had to be big enough to fit in front of most anamorphic adapters without (too much) vignetting and image quality couldn’t afford any hits – which is a serious issue with any other “photographic” variable-strength diopter you can find on eBay, as Jim Chang shows in his post at Rapido Technology’s blog – since anamorphics usually mess up your image quality enough. This technical demand is the cause for the high prices – plus R&D expenses!

Revealing the trick: an Iscorama is basically a high quality anamorphic block set to infinity fused with variable-strength diopter that ranges from +0 to +0.5 (which limits minimum focus at 2m!). Good thing for us we now have plenty of high quality anamorphic glass available – Isco Cinelux and Blue Stars, Kowa B&H, Hypergonars and so forth -, both modern and vintage, to suit every kind of look. Whereas the Iscorama is more like a mac computer (sleek design, light and powerful but you don’t have much control over what goes on in the inside), the alternative to them would be PCs, cheaper, bigger, but they allow you to control every aspect of what goes under the hood. You can pick your taking lens, your anamorphic and even choose from a few options of variable-strength diopters. Later, if you wanna tweak it, each of these elements can be replaced and upgraded at your will.