Anamorphic on a Budget – Chapter IIIA

< < BACK TO CHAPTER III - LENS RESEARCH

The most subtle lenses, when it comes to stretch factor are also the newest ones. Between 1999 and 2004 the standard screen size switched from 4:3 to 16:9 and, the same way it happened in the movie industry, would be too expensive to replace all the camera equipment currently in use – specially for those who had just bought an expensive mini-DV camera.

The adapters’ manufacturers were scarce and their target market was composed by users of high-end cameras like Sony PD170, VX2000, Panasonic DVX-100 or Canon GL1 and GL2, that shot only at 4:3 aspect ratio. Panasonic made their own adapter, the AG-LA7200, one of the biggest 1.33x, expensive until this day. Sony and Canon were covered, mainly, by Century Optics (which ended up as part of Schneider Optics) and smaller brands (also less reliable when it comes to quality), as Optex and Soligor.

These cameras had very different (and non-standard) mounts: some used bayonets, others had regular filter screws and different sizes. Each adapter had a specific back for the camera it should work with. Another important fact is that most of them were only partial-zooms, which means they only worked well within a specific focal range on the camera’s zoom range. From 50mm onward, the image would be completely blurry.

Focus was also fixed between 4m and infinity, so there would be some serious blurriness issues when the subject was closer than that. This design’s big advantage is that all focusing is done on the taking lens. It’s like focus went “through” the squeeze, easy to understand their name now, I think.

Both these negative qualities – partial zoom and fixed focus – reflect on their modern reuse, paired with DSLRs. Lenses over 50mm and subjects closer than 4m both require diopters to be in focus. Diopters are treated like filters but they’re actually auxiliary lenses and also go by the name of close-ups.

The biggest advantage of this type of adapter is that they allow the use of wide-angle lenses – between 28 and 35mm on a full frame sensor – without any vignetting from the internal walls of the adapter. Besides that, all the focusing is still done with the taking lenses, simplifying set workflow.

Their build is simple: just two cylindrical optical elements aligned with each other. All 1.33x adapters have a screw on the side that, when loosen, allows the user to rotate the glass and properly align the stretch direction.

Low quality on the edges and corners is a common issue with 1.33x adapters. It’s easy to notice strong chromatic aberration, loss of sharpness and barrel distortion when the taking lens is a wide-angle and you’re almost vignetting. Flares are also very strong, two thin lines easily recognizable by their strong blue tint.

Flare, lens distortion and chromatic aberrations on a single picture.

As many of these adapters have bayonet mounts, they require some modifications using step-up rings and pliers (still to be translated). Another challenge is attaching diopters in front of them in a safe way, since there are no threads for additional filters. There are clamps that work with the smaller models – Optex, Century Optics and Soligor – but the Panasonic AG-LA7200 is always a challenge due to its massive size. 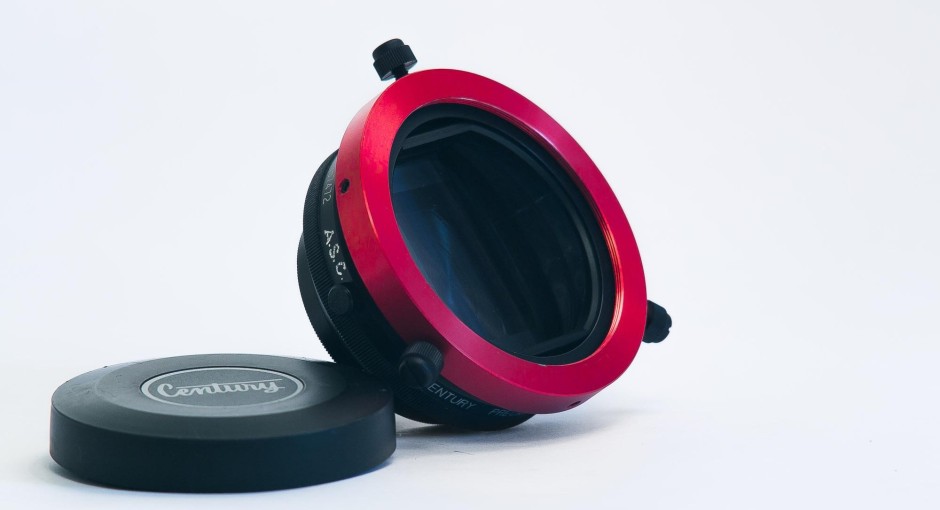 Panasonic’s greatest advantage, and the reason it’s still so valuable, is his optical quality that’s better than the smaller models and the fact that it allows much wider shots through 28mm lenses on a full frame sensor without any vignetting.

The downside is because of its size, it’s pretty hard to find properly sized diopters. With a great deal of help from a friend, Bruno Nicko, starting with a 3D model using the exact measurements taken from the front of the lens, we made a unique aluminum piece with 105mm threads. 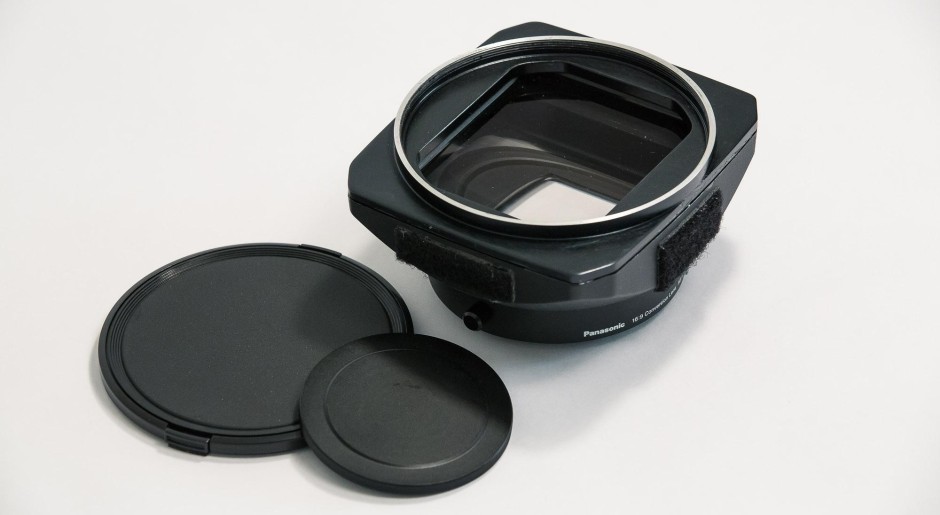 Without this piece, the only diopter choices for this lens would be from the rare russian LOMO Foton-A, or 4.5 inch filters. These diopters are big enough to cover the Panasonic AG-LA7200, but they still require some mods in order to attach safely to the front of the lens. There’s also a legend about a 105-86mm step down ring that no one ever found on ebay.

Near the end of the DV fever, when many cameras were already capable of shooting 16:9 digitally through the pixel aspect ratio feature, Century Optics released the only full-zoom adapter for this dying market. It’s a big lens (almost the same size as the Panasonic) that, besides the alignment knob, also has a focus ring. This allows the user to have sharp images of subjects up to 0.5m (opposed to the original 4m for the partial zooms) and also use lenses longer than 50mm..

Its performance is much superior when compared to the other adapters – even considering its double focus aspect: it’s required to focus both taking lens and the adapter in kind of the same distance. Not nearly as precise as double focus needs to be (we’ll get to that in a couple chapters). It’s still possible to rack focus using only the taking lens, as long as you plan it well and set the adapter’s focus ring to cover the target range. 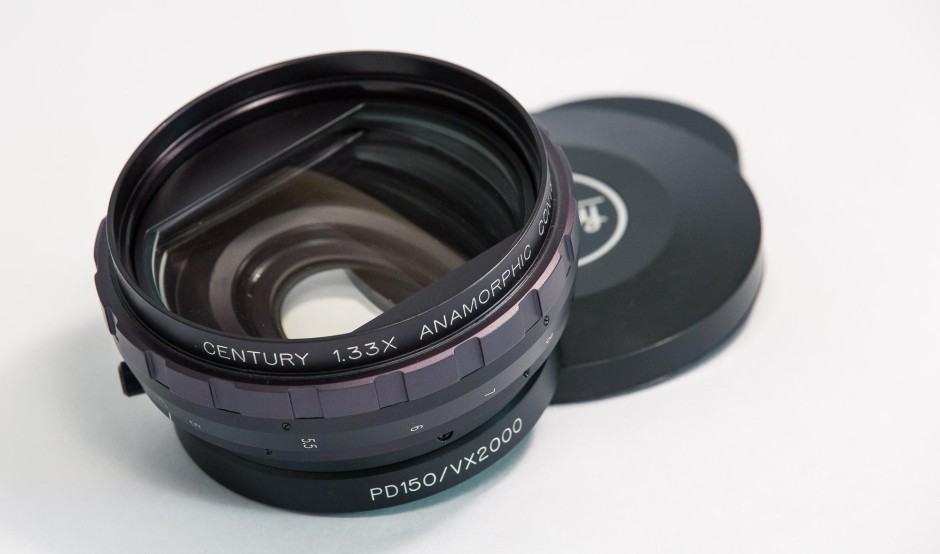 As you can see in the pictures of the adapters so far, the optical elements in these lenses aren’t circles, but more of a square shape, which means that the oval shaped highlights – anamorphic bokeh – won’t show up when this kind of adapter is used, first because the 1.33x stretch is too subtle to be noticed on the bokeh and second because the square aspect of the glass doesn’t affect the light shape. To achieve this effect it’s necessary to use a modified taking lens (see chapter IIIH – Faking the Look). On the bright side, when you have a 1.33x stretch applied to 16:9 footage – such as today’s standards – the resulting image follows a 2.36:1 proportion which means CinemaScope aspect ratio straight out of the camera.

A problem that didn’t exist when these adapters first came out is, due to DSLRs large sensors, getting a properly focused image using focus through adapters can be challenging. Mini-DVs have a 1/3″ sensors, which caused a larger depth of field. When you pick a sensor that’s almost thirty five times bigger than that, the best way to get a sharp image is to close down the iris on the taking lens. Apertures between f/4 and f/5.6 are usually enough to achieve good looking, good focus results. Diopters also help a lot when it comes to improve the quality of the images taken with focus through adapters.

A brief comparison between pros and cons for focus through adapters:

CONS:
– Strong lens distortion and chromatic aberration around the edges;
– Needs diopters when the taking lens is longer than 50mm;
– Needs diopters for subjects closer than 4m;
– Taking lens aperture should be between f/4 and f/5.6 for best performance;
– No oval bokeh.

Anamorphic on a Budget – Chapter IIIB